QR_U (an open school) is an interactive exhibition project I created with fellow artists Lois Klassen, Elisa Yon, and Adam Stenhouse. The project existed as a 10-day school-within-a-school at Emily Carr University of Art & Design in December, 2011.

The project presented participants with a series of questions about their relationships with the arts, learning, and technology in order to generate dialogue through conversation, imagery, video, and text. The range of questions and ideas stemmed from three overarching themes: What is the new school of the arts? Where does learning happen? and, How can we learn to learn?

Participants could contribute to the ongoing dialogue in the ‘virtual school’ at http://qruopenschool.ca and within the physical space of the gallery by taking part in a series of events. The media and events in the gallery space were instigated by questions and responses generated at the QR_U virtual school, which continues to exist online indefinitely at the website listed above. 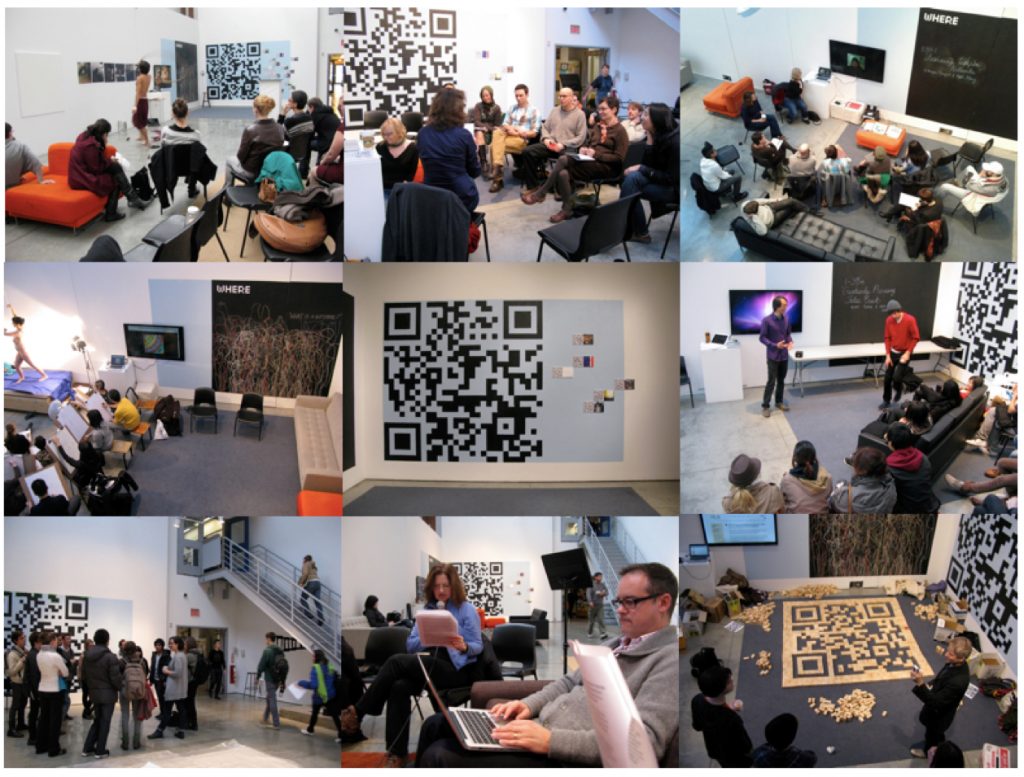 ‘QR’ in the project title is a play on the abbreviated form of QR code, which actually stands for Quick Response. This project aimed to create an occasion for experimenting with and moving beyond the quick response. Participants were invited to access the website questions in the gallery by using the computer stations and by scanning the small and large QR codes. exhibition images submitted to the website were mounted on the gallery walls. If a visitor scanned its adjacent QR code, he or she would be taken to the question that the image responded to. That individual could then choose to post a response.

We intended to make visible the inside of an open school and to build a culture of exchange and dialogue – with multiple entry and exit points. The term ‘open school’ was used as a way of initiating an ongoing process of network relations that could be understood as an overlapping experience of art, teaching, and learning. The public gallery space was transformed into three open classrooms where events and discussions situated the project’s larger questions. QR_U brought together experimental approaches to teaching and learning and art practices that explore processes of knowledge, which contributed to the dialogical, collaborative and performative events that emerged. The project aimed to create an occasion and a setting to think about the future of the art school. It was a social experiment and “a really transformative way of providing context for debate…It became a place where people stopped and listened” [1]

While events occurred daily in the physical space of QR_U, conversations continued in the virtual school. As image, video, and text responses were submitted, a multimedia and networked archive began to grow.

QR_U was conceived in conjunction with and response to the 2011 ELIA Leadership Symposium - W/HERE: Contesting Knowledge in the 21st Century.

Community and public participation was intended to both challenge and inform the ideas being discussed by current leaders of higher arts education.

Project development involved gaining interest and participation from local faculty and students as well as those from the UK, Germany, Finland, United States, and across Canada.

NOTE:
UBC students new to using ubcarts.ca can email Heidi with questions. For instructions on posting an Activity, click here.

I am passionate about working with others to create effective forms of teaching and learning. I am interested in all forms of education including schools, community, and arts-based projects. I have fifteen years of experience working in higher education as well as over six years of experience working for a non-profit organization. I have 11 years of experience with online learning. I collaborate with others working in the fields of art, design, education, technology and media culture. My areas of interest include: teaching and learning; curriculum and program development; online learning and media culture; art and education research.

in-between from Heidi May on Vimeo.